Wood, cuttlefish bone, stones and shell fragments picked up from the Mediterranean Sea. Here is Sicilian Tellina (the tellina is a delicious Mediterranean mollusk and in the sculpture it is the one above the eye of the little fish).  I don’t know how and when my passion and the discovery of cuttlebone chiseling was born, a bit like Michelangelo said that: “The work of art is already inside the block of marble. The work consists only in removing the excess, to make it emerge. You don’t have to add anything, you just have to know how to remove.” I started with a simple nail file, now I use diamond tip files. My subjects are faces, fish and glimpses of Sicily, the cocci d’amuri (Sicilian for glimpses of love). They can be used to embellish environments of various kinds. The calcium carbonate of which they are made of, makes them fragile and light, so their processing is particularly delicate and meticulous. Exploiting the characteristic form lanceolata, I succeed in realizing forms and different subjects, spacing from the white of the stuccoes of the Serpotta, to the bright colors of our Sicily. 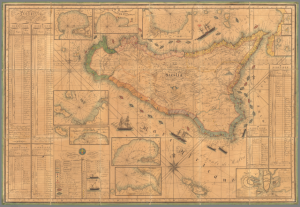