I’ve been working for some time in the heart of Palermo and I was extremely impressed by the port with Mount Pellegrino, the most beautiful promontory in the world according to Goethe, as a backdrop. 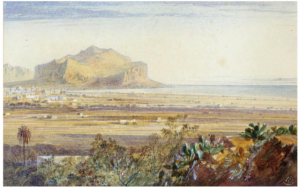 Palermo (from Panormus, all port, for the Romans), the capital of Sicily, is closed between the sea and the mountains and its port, already large in itself, seems even more so wrapped by promontories and mountains, around which the splendid Sicilian city takes place. The Zyz (flower) of the Phoenicians (VII-VI century BC) is a Sicilian history book: from prehistory to the present day. Palermo is a unique city in the world because it is really bizarre the clear and palpable feeling, for those who visit it, to walk inside a centrifuge of millenary history, where traces of cultures and architectures Phoenician, Greek, Roman, Byzantine, Arab, Norman, Aragonese etc. overlap each other sometimes creating completely new architectural styles or simply designed by chance, which continuously evoke emotions to those who visit it.