Lu mari ricamato (Sicilian for embroidered sea) is the title of this artwork . This necklace was made with the technique of “weaving”, typical of the 800, which originated in Sicily and then spread throughout Italy. The final result makes the jewel appear as if it were a hand-embroidered fabric. 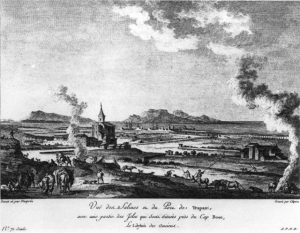 The processing of red coral from Trapani is an art that dates back to the eleventh century, when the Arabs ruled in Sicily. Since then, skilled Sicilian coral masters have created real masterpieces, such as nativity scenes, necklaces, bracelets, liturgical objects … in which the coral is often coupled with copper, gold, lava stone. Princes, cardinals, popes and wealthy aristocrats were among the great clients. If you come to Trapani you cannot  miss a visit to the Pepoli museum which preserves beautiful creations in red coral from Trapani.

The technique of “weaving”, typical of the 1800s, originated in Sicily and then spread throughout Italy. The final result makes the jewel appear as if it were a hand-embroidered fabric.

(photo) Trapani, View of the city and the harbor from the salt flats, 1791