I was inspired by the coffa ,these ancient bags of Sicilian farmers. Beads, bullions, sequins, central disc in canvas painted in acrylic, crystal inserts. Back in leather. Brooch made with the technique of bead embroidery. Entirely sewn by hand. 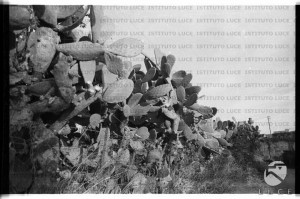 The coffa siciliana is a basket made with the weaving of the curina, the heart of the dwarf palm. The coffa bags were used to put the fodder or bran to give to the horse or donkey, in this case it was tied by the handles to the head of the animal.The coffa was also used by farmers for sowing, while the larger one called zimmili was used to carry the harvest of the day, or the wood to bring home, or even to put inside a small child and keep him  warm . This object brings us back to the middle of 1300 when the Aragonese ruled Sicily. A certain Guglielmo Buccheri, a hermit then beatified, was called cuffitedda because he used to carry the coffa over his shoulder. Today, the coffa has become a fashion accessory for women: you can find a folkloristic bag decorated with chimes and mirrors that recalls the harnesses of the horses of Sicilian carts, or embellished with embroidery and lace, it becomes an evening bag.
Prickly pears are one of the great symbols of Sicily. They grow everywhere: on the sides of cliffs, in gardens, on the roofs of abandoned houses, on the sides of roads … Its fruit (ripe by the end of August) is delicious and much loved by Sicilians who also make rosoli and mostarda, a sweet typically prepared in jars, with the addition of carnations, cinnamon and almonds. Gelo is also very appreciated, a sort of gelatinous cream. Prickly pears were imported by Arabs during their domination (IX-XI century).

(photo) Prickly pears in the hinterland of Sicily