Saint Rosalia and Saint Agatha are the most popular two saints (I ddu Santuzze in Sicilian) in Sicily, patron saints of Palermo and Catania and they protect us from all evil.
Size and weight are referring to each brick. 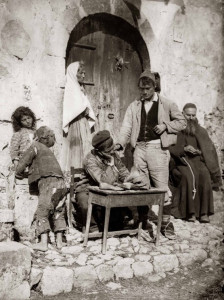 The Mattunazza (Sicilian for street brick ) are devotional bricks that we often find in the alleys and behind the doors that close the Sicilian houses, especially in the countryside, as a blessing. It was customary when building a house to put one of these mattunazza outside, before living in it.

Santa Rosalia, a santuzza of Palermo, is the patron saint of the Sicilian capital: Palermo. Born Rosa Sinibaldi, in 1130, when in Sicily reigned the Normans, from a noble family related to King Roger II of Sicily. Promised in marriage to Prince Baldovino, the day before the wedding had a mystical vision and decided to take the vows taking refuge in a family estate, the forest of Santo Stefano di Quisquina. There she lived 12 years inside a cave documenting her choice of life with a Latin epigraph written at the entrance of the cave. Later she returned to Palermo where she settled in another cave, at the top of Monte Pellegrino, where she died. In this place in the seventeenth century  was built her sanctuary, venerated by the people of Palermo. At least once in their life every Palermo citizen undertakes the climb to the sanctuary of the santuzza.

Sant’Agatha is the patron saint of the city of Catania. Her feast, which takes place fromFebruary  3rd to the 5th , is one of the most picturesque in the world. Agatha was born in the 3rd century, when the Christian world was on the point of undermining the pagan one. The beautiful young woman was the victim of the attentions of the governor of Catania Quinziano and at his refusal was martyred and killed (February 5, 251). Since then she became a heroine for both Christians and pagans. The cannalori, wooden carts with a large candle in the center that represent the guilds of arts and crafts of the city, are carried on the shoulder with a classic dancing gait that allows an easier movement. They go around all the streets of the city shouting: “: “Tutti, devoti tutti! Viva Sant’Aita” (Everybody, everybody devoted! Viva Sant’Agata”)

"Art for me has always been a journey, a continuous discovery of landscapes and colors, traditions, superstitions and folklore. A journey that transforms, enriches every form of thought and manages to merge essence and harmony of things."