Un giorno siciliano (Italian for A Sicilian day) on the slopes of Etna. The inspiration for this apron comes from the visions of the eruptions of Etna, or the foam of waves crashing on the coast. From the passion for life and the energy that comes with it. Made of cotton canvas with fabric colors. Unique pieces. 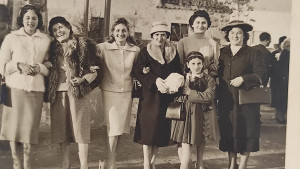 Etna, the highest volcano in Europe (3300 meters above sea level), imperiously dominates the eastern part of Sicily, but it is so huge that it can be seen up to hundreds of kilometers away. Men of all ages have climbed to the top starting with the philosopher Empedocle from Agrigento (V B.C.) who, according to legend, ended his life by throwing himself into it. The toponym (Aitna) seems to derive from some word whose etymology, leads back to the meaning “I burn”. For the Arabs of Sicily (IX-XI century) it was a mountain twice as high and they called it Mons (mount) Gebel (mountain), twice a mountain; and until the recent past (but also today) the Sicilians called it Mongibello. But its Sicilian name par excellence is: “a muntagna”. It has given work to the nivalori (that they collected the snow, they preserved it in the caves of the volcano and then they sold it in the villages), to the coalmen, to the gatherers of the Ginestra (excellent for the bakers).