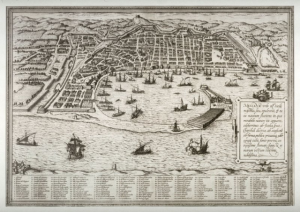 The legend of Colapesce is one of the most beautiful of Sicily, ancient of almost thousand years. Cola was a boy from Messina who loved to stay hours and hours under water. One day, King Frederick II came to know of this extraordinary fish-boy, arrived with his court aboard a boat and wanted to test the qualities of which so much was said. First he threw a cup and then a crown in bridges deeper and deeper. But Colapesce both times returned to the surface with the objects. The third time the King moved to the deepest point of the Strait of Messina and threw a ring. That time Cola did not resurface anymore. And it is said that while he was just under one of the three heads of the Sicilian triangle, Capo Peloro, he realized that it was collapsing.  And so he stayed down there, to support it, preventing Sicily from sinking.

(photo) Messina, birds-eye view of the port and the city. A town plan and view of the harbor, including docks and sailing ships in the foreground, 1572