“Cuci a riti ppi lu su beddu Affiu, Ancilina a Cifaludese” (Sicilian for “she sews the net for her handsome Alfio, Angelina from Cefalù”). With this shawl I wanted to remember the fishermen’s nets. The shawl was worn by the Sicilian women who patiently waited for their fathers, husbands or children from the long and exhausting fishing trips. 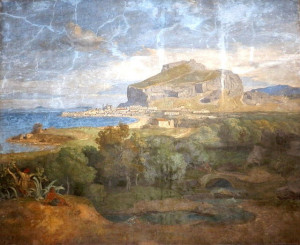 Cefalù is a picturesque seaside village at the foot of a fortress full of history, ruins, breathtaking views and lush Mediterranean vegetation. Cefalù is one of the pearls of Sicily, with its narrow streets, the scent of the sea that never leaves you, and some of the most beautiful monuments and artistic works of the island and of the whole world. Among all, the spectacular Norman Cathedral of the twelfth century, an absolute masterpiece of the so-called Arab-Norman art.

(photo) Cefalù, view and landscape, dominated by the fortified rock. The structure and towers of the Norman cathedral rise in the middle of the town.

(photo) Cefalù, view and landscape, dominated by the fortified rock. The structure and towers of the Norman cathedral rise in the middle of the town.