“Agata a Trizzota talia lu mari e prega San Giuanni” (Sicilian for Agata of Acitrezza looks at the sea and prays to San Giovanni, the patron saint of Acitrezza). In this work I drew inspiration from the fishermen’s nets. The shawl was worn daily by women who waited for their husbands or children to returned from exhausting fishing trips. Knitted with cotton yarns. 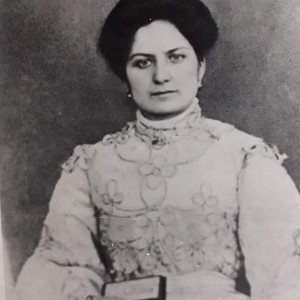 Acitrezza is a picturesque seaside village on the eastern coast of Sicily made famous by the writer Giovanni Verga and his fishermen’s. It is dominated by the majestic shape of Mount Etna (3300 meters above sea level) which imperiously embraces this area of Sicily. Just behind its coast there are the beautiful Faraglioni of Acitrezza (or Cyclopean Isles), rocky formations of lava erupted 500 thousand years ago. Legend has it that Polyphemus, the one-eyed giant who captured Ulysses and his companions, killed the shepherd boy Aci with one of these stacks because, as always!, of a beautiful young lady, the nymph Galatea, loved by both.  Moved to compassion, Zeus transformed the shepherd boy Aci into a river so that when he went to sea he could eternally unite with the nymph Galatea. The fishermen of Acitrezza are famous throughout Sicily and those boats, illuminated at night, look like stars at the bottom of the sea, off the coast of the village.