“A bedda Canicattinese cu lu su scialli siciliano, fa vutari tutti pari quannnu trasi n’ta l’Accademia di lu Parnasu” (Sicilian for the beautiful from Canicattì with her Sicilian shawl, makes everyone turn around when she enters the Academy of Parnassus). 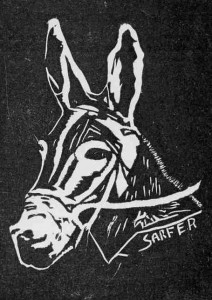 Canicattì is a town in the southern part of Sicily. With a strong agricultural vocation, the town has a marked Sicilian imprint. In Canicattì there is the Accademia del Parnaso a cultural club founded in 1922 that, above all in early times, was a rather bizarre academy that brought together people of different political and cultural backgrounds, ideas and character and which included professionals, priests, hosts, poets, philosophers, etc.

(photo) The scecca (mule) by Decu Martines, symbol of the Accademia del Parnaso