As an advertising graphic designer by profession, he begins to “compose” these works that praise pure optimism, furnishing the expositions of the Sicilian Region in the United States and in Italy, on the occasion of various events starting from 1995. Discovering this new “profession” as a painter, after the considerable appreciation received in various expo’s in America and furnished with large paintings the houses of well-known Hollywood stars, contributing to the development of a new “vision” of Sicily, where everything is characterized by it’s brightness and strong chromaticity. Surely it is a personal interpretation of Sicily, different and far from the usual stereotypes that detach themselves from the tradition, materializes in the exaltation of light and colors, with impossibile perspectives, multicolored houses, boats and dancing “lape”, and recently pure silk productions for scarves, kaftans and clothes tailored inexclusive garments  this expresses the true soul of the south under the banner of sunshine.

“The pictorial and graphic style is an surreal representation of reality, but, the Sicily proposed on the silk of the fashion line or on canvases, or on objects of furniture and design, is the pure desire to show it even more beautiful than ever, exalting it out of its ownentity, and proposing it as a magic all and that in words all Sicilians love, but few know how to protect and enhance it.” 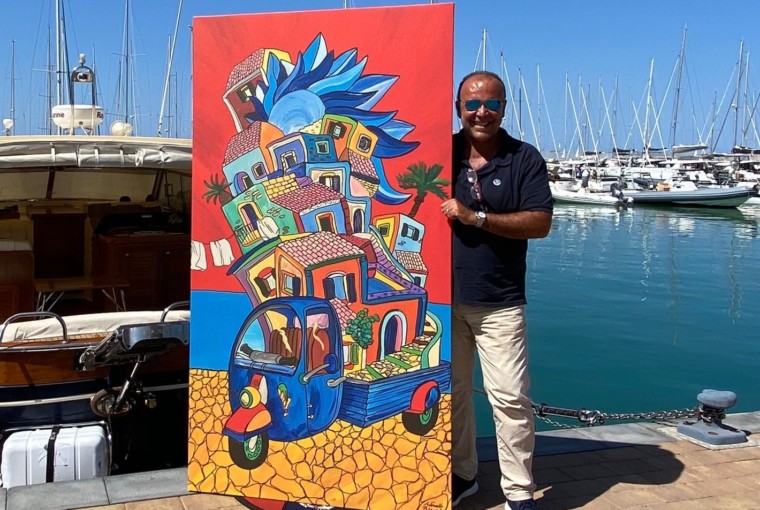 “Let me … o let me bathe my soul in colours; let me swallow the sunset and drink the rainbow”, writes Kahlil Gibran. Observing one of Antonello Blandi’s works is like bathing oneself in colors. His chromatic universe imposes itself for the brightness of the tones, evocative of a strong, solar and passionate Sicily. Internationally known Antonello Blandi has presented to the world the image of a Sicily with liquid architectures and fantastic perspectives, a strong image, far from cultural stereotypes. We find it, as well as in graphic works and paintings, also in ceramics, scarves and other art objects marked by his unmistakable style”